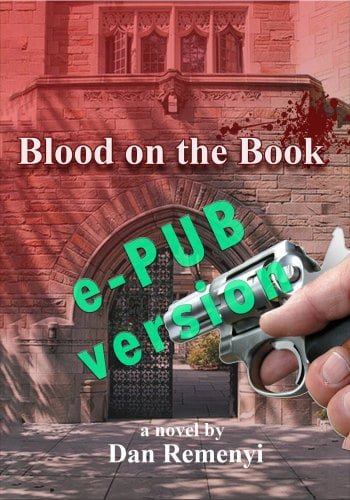 Blood on the Book e-PUB version

Driven by good intentions and with a little help from an obscure Order of Monks in Italy, Professor Finn Kelly, Ireland’s leading mediaevalist finds a way of making easy money for his favourite charity in Dublin. This involves him “discovering” a long lost manuscript which is reputed to be an early Oscar Wilde play. Finn is surgical in his execution of this caper, but he needs his friend’s help who is not so meticulous. As Finn should have known, easy money always has consequences, and before long O’Connell College is shocked to the core by the murder of the College Bursar in his office. At the same time a mysterious man appears in Dublin inviting Professor Kelly to help promote US-Irish relations in Boston. Whilst on a consultancy assignment at the Vatican Finn meets Maria, the beautiful green eyed Director in charge of facilitating the stay of visiting academics.

Then there is a burglary, the discovery of a body in the Grand Canal and the disappearance of a long standing friend. Finn Kelly realises that he is in imminent danger but the Garda Síochána are not convinced these events are anything more than a string of coincidences. There is a double murder at University Church on St Stephen’s Green. And when the Garda Síochána finally become fully engaged it is Inspector Shamus Quinn who arranges a suitable trap which leads to a kind of justice.