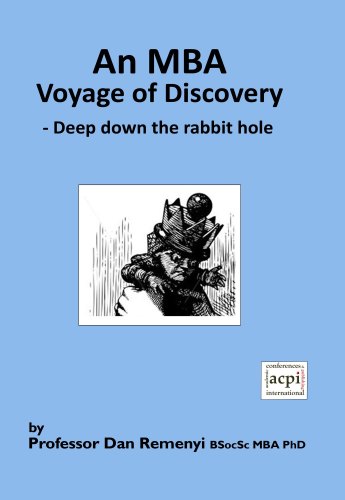 An MBA Voyage of Discovery - Deep down the rabbit hole

An MBA Voyage of Discovery - Deep down the rabbit hole

The story recounted in this book is my personal feelings about the Business School where I obtained my MBA. They are entirely subjective. I expect there will be those who will strongly disagree with the sentiments expressed herein. It is for them to tell their own story.

Even before I set out on my MBA journey I had already heard mumblings and grumblings that the degree was controversial and indeed over rated. “These MBAs think they know nearly everything”, was a typical expression. “They think that they deserve to walk into a top job just like that!” was another comment. It is hard to say whether these complaints were justified, but if they were then it was to a large extent employers who found it useful to place MBA graduates in top positions.

And by and large it would seem that most MBA graduates made a success of what they chose to do after their graduation.

The MBA degree is now offered by hundreds if not thousands of universities around the world and this alone is an indication of how well it has done. But MBAs differ enormously and the differences stem from multiple reasons. Resources are obviously critical, as is the prestige of the institution awarding the degree. But there is also the question of the style of the key lecturers and also their sense of responsibility.

The way the MBA was delivered, as described in this book, was a make it up as you go along event and I regret to say that I have seen this attitude operating at other universities in recent years.

This book takes the reader through an educational journey at a particular time and a particular place. Nonetheless it seems to me there may be some general lessons to learn from the story.